Controlling a PC from an Android device is an increasingly popular option for those that want the power of their desktop in the palm of their hands. But what if you want to control Android from PC? This can be extremely convenient, as it lets you enjoy your favorite Android games on the big screen, or respond to messages without getting up. It can enhance productivity and media consumption, and work as a nerdy party trick.

Without further ado, let’s count down seven awesome ways and apps to control your Android device from a PC! 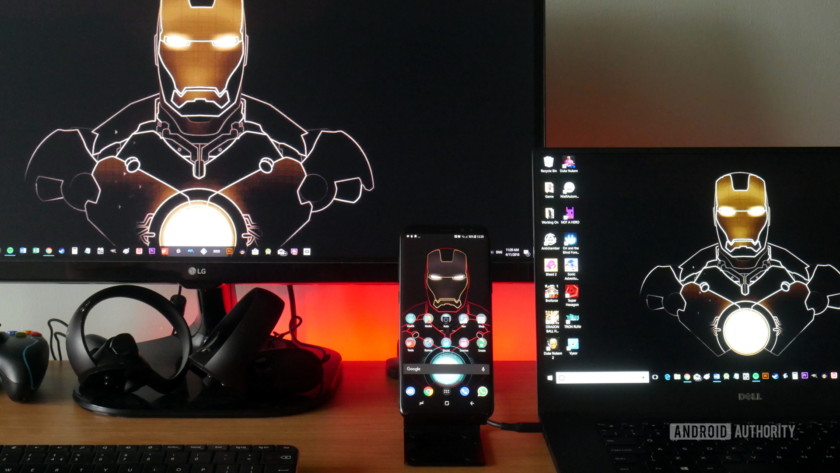 If you like the sound of continuing reading a web page you have open on your desktop on your phone when you visit the loo, you should check out Join. This is actually the tool I use most often out of the bunch!

Join is a Chrome App and once you have it installed on your phone, you can pair the two together. From there, you can then send the tab you’re reading to your Android device, paste the clipboard to your device, write text in an app on your device, send SMS messages, send files, take screenshots of your phone screen (especially useful if you work for Android Authority), and more — not bad!

This isn’t full control of your smartphone, but for certain applications I find it’s better, as it’s much lighter and won’t slow down your computer or crash on you. It also has a few other abilities. For instance, it works both ways and you can also ping articles back to your PC.

You can then share your Chrome tab with your Android device and carry on reading on the go.

Pushbullet lets you synchronize multiple devices in order to share files and send messages. This one also supports WhatsApp (sort of).

While you’ll be able to send WhatsApp messages and see them pop up when you get new ones, you won’t be able retrieve your message history. There’s also a limit of just 100 messages (SMS and WhatsApp) per month unless you pay up. The pro version is a fairly costly $4.99 per month.

For our purposes, there are better and cheaper options on this list.

It has some unique features, too. It allows you to control multiple devices and engage in a kind of chat between them. There is potentially a good argument for Pushbullet as a productivity tool for offices. But for our purposes — trying to control an Android from PC — there are better and cheaper options on this list.

If you were hoping to fully control Android from PC, then you might have been left a little cold by the last two options. This one should be a bit more up your alley, so long as you have a Samsung device. 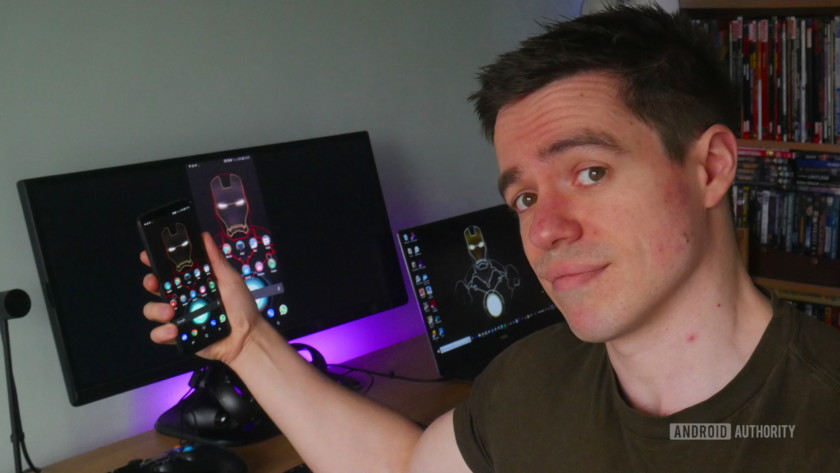 Scrcpy is an app that will mirror your screen and fully allow you to control your mobile device from a PC over USB or Wi-Fi (a recent addition). It’s free, it’s open source, and it doesn’t require root access! It works really quickly and has lots of features too. It’s a little less user-friendly than some other options on this list, with the developer recommending you build it yourself (a requirement for Linux users). That said, there are ready-made versions to download that will simplify the process.

For those who are put off by Scrcpy’s DIY ethos, Vysor is the next best option. This app mirrors Android to PC using Chrome, and it’s actually really good. You can choose between speed and performance but on a wired connection at least, it’s actually pretty fast. It also has some interesting potential features for offices, like the ability to share a single Android device with multiple users! 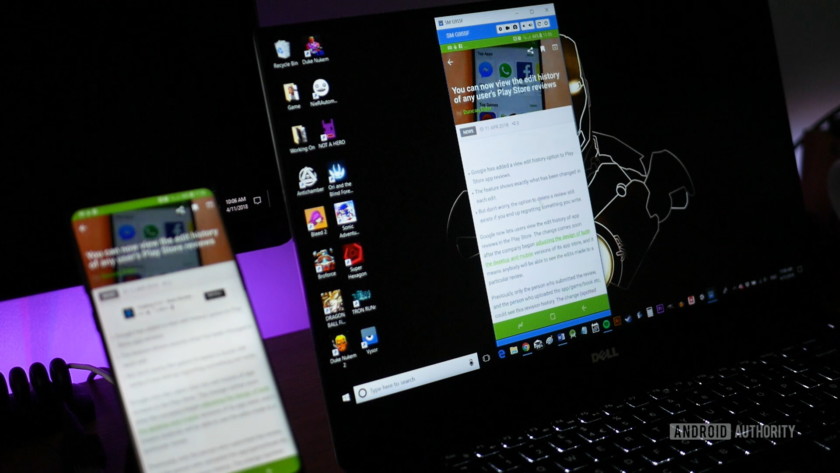 As with most of these things, there is a paid and free option. You get a lot more features and better performance if you go with the paid option. Wireless is only supported on paid for instance, as is full-screen mode and “high quality mirroring.”

There are more that do similar things of course, such as ApowerMirror. It’s just a matter of finding the one you like most.

Like Join, DeskDock doesn’t mirror Android to PC — it gives you another way to control Android on a PC. Specifically, this app allows you to share your mouse with your phone or tablet. So, if your phone is sitting next to your PC, you can simply move the mouse over to one side and it will transition to your Android device. This is handy for quickly opening and closing apps or browsing the web. It could also potentially be useful for developers who want to test their app’s functionality on a hardware device from one spot. 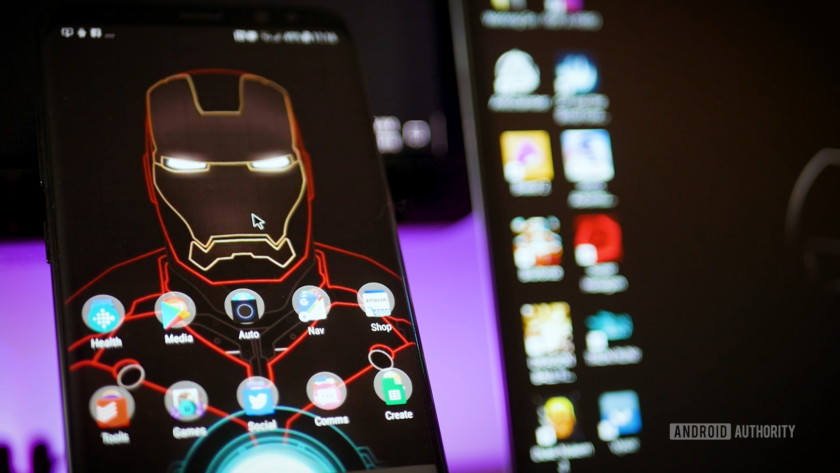 There is also paid version, which allows you to share the keyboard, clipboard and more. Alternative apps that do something similar include Share Mouse and Keyboard (original name) and Synergy – which apparently isn’t quite what it used to be.

AirDroid is a surprisingly powerful app. In many ways it’s something of an amalgamation of all the features we’ve already seen here. You can send messages, share your clipboard, and upload files via a control panel. You can also mirror your screen, keyboard, and mouse! Screen mirroring isn’t as smooth as SideSync or Vysor, but it is fine for quickly firing off a WhatsApp message.

A lot of the functionality is free, but you’ll need to pay to remove the ads and 30mb file transfer limit. It costs $2.99 per month, though, which is significantly less expensive than something like Pushbullet.

Tasker allows us to set up triggers and events on Android. That way, we can set our phone to do something automatically when it spots a new connection, notification, or location change. Both Join and Pushbullet also have Tasker support baked in, meaning you can trigger a whole range of phone functions through an SMS or a web page.

Tasker is an app that allows us to set up triggers and events on Android.

There, are lots of potential applications for this, whether you want to find your phone’s coordinates or use it to prank friends. It just takes a little imagination.

There you have it: seven different apps and seven different ways to control your Android device from a PC. The best one for you will, of course, depend on your workflow and the way you like to use your devices, but hopefully, something here will prove useful. 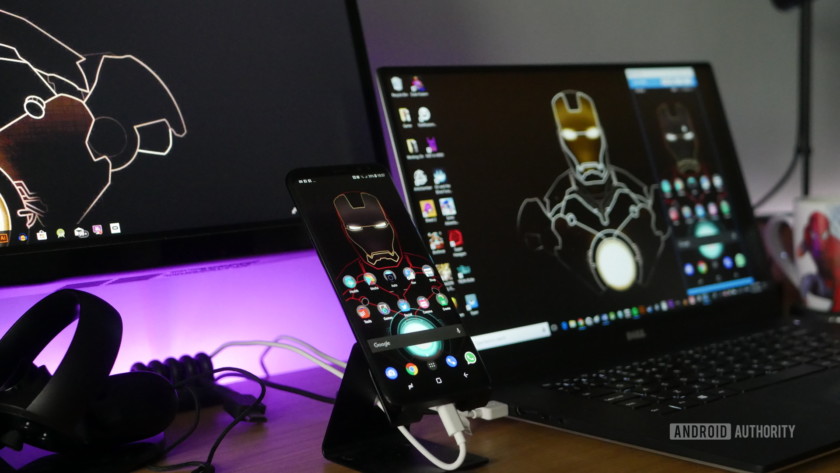 Have I missed any good ones? TeamViewer is also very good, though a little on the expensive side! Let us know your favorites down below!